Location
Beyond the Board 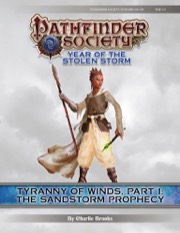 As a repurposed prison, the Sandswept Hall Pathfinder lodge in Sothis is an imposing target for thieves, yet an enemy operative recently broken in, stole valuable property, and escaped into the sun-scorched deserts of eastern Osirion. The PCs are the best disposed to follow the culprit’s trail. Be warned, though, for the Scorpion Coast is the battleground of powerful elemental tribes that have assailed Osirion’s frontier with cruel sandstorms and deadly force for millennia.

Content in The Sandstorm Prophecy also contributes directly to the ongoing storyline of the Scarab Sages faction.

Rest of series is cheduled for July 28 and August 11.

This event is fully booked.